First Look: Inside the New Seaplane Service Between New York and Boston on Tailwind Air. 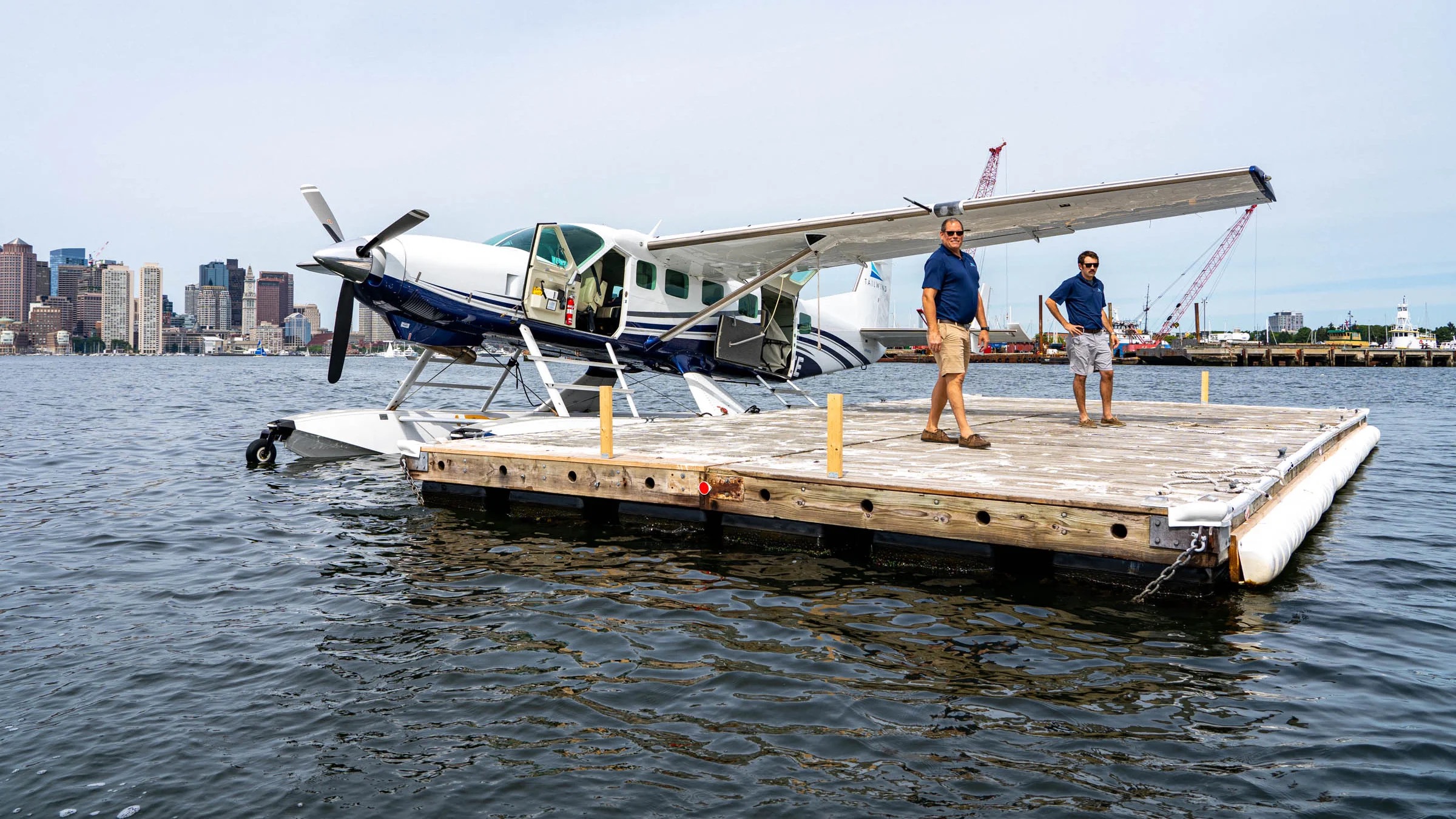 This post contains references to products from one or more of our advertisers. We may receive compensation when you click on links to those products. Terms apply to the offers listed on this page. For an explanation of our Advertising Policy, visit this page.

Tailwind Air launched its long-awaited seaplane service between Boston and New York City on Tuesday, closing the door on a nearly decade-long quest to bring the downtown-to-midtown service to the cities’ respective shorelines.

Tailwind was the first airline to launch seaplane service between the two cities in modern times, after Cape Air pulled back on plans that it had set in February 2020, which were derailed by the COVID-19 pandemic. Both Cape Air and Tailwind had been working on launching seaplane service between the cities for more than half a decade. Tailwind won final approval from the Federal Aviation Administration in July.

Bringing the service to reality was a challenge, according to Peter Manice, Tailwind’s vice president of marketing and head of scheduled operations.

According to Manice, seaplanes last made regular flights into Boston in the  late-1940s or early-50s. A variety of local restrictions and tricky air traffic control considerations surrounding nearby Logan Airport have made it logistically difficult since then.

“We had to come up with a process and a procedure with ATC and a host of federal and state agencies to enable seaplane operations to happen in Boston again.”

The carrier typically runs shuttle routes from Manhattan to summer hotspots on Long Island — East Hampton, Shelter Island and Montauk — as well as Bridgeport, Connecticut, using a fleet of eight-seat Cessna 208 Caravan turboprops with an amphibious configuration, meaning they can land and take-off on both paved runways and water. For charters, the airline can also arrange for other types of aircraft.

The idea of the Boston service is that it saves time over traditional travel methods. Though it flies slower than a commercial jet, Tailwind’s service slashes the overall door-to-door trip time, and it’s faster than any Amtrak — including the higher-speed Acela.

Still, Manice said, the service is aimed at business travelers to whom time is money — and who might pay nearly as much if they book last-minute walk-up fares for alternate options on Acela or the commercial airline shuttles.

“If you value your time at a certain amount, the time savings and the lower stress of the experience, we think, makes our prices very reasonable,” he said. “We do hope that as we scale, prices will come down somewhat.”

Tailwind is, of course, happy to ferry leisure travelers as well. But as it works with codeshare partner Southern Airways to make its flights available in global distribution systems (GDS) for business travelers, corporate accounts seem like a potential winner.

The argument was certainly compelling for Wayne Lopez, a Boston-based sales director who was headed to New York for work.

“My office is in the [Boston] Seaport, so it’s extremely convenient,” Lopez, who was traveling on the first flight with his fiancée, told TPG. “I’ve been anticipating this for quite some time, I’m excited to see it happen.”

One thing that Tailwind does not yet have in place: a loyalty program, although Manice says one is in the works. In the meantime, customers can purchase a 10-pack of flights for a discounted price.

The time savings argument was particularly interesting to me, even if Tailwind’s fares mean it’s unlikely that I can take advantage of its service regularly. I lived in New York for most of my life, but recently moved to Boston and frequently travel between the two cities.

That meant that I was a perfect candidate to try out the first flight on assignment for TPG — and then visit the office afterward!

So: does Tailwind offer a product that’s worth the price? Will it revolutionize the Boston-New York market?

Before I could answer that, I’d have to actually find the departure point for the first flight.

Figuring out exactly where Tailwind would depart from was a bit tricky, though maybe that’s just because I’m still new to Boston. Or, perhaps, because there’s a lot of construction going on near the foot of the pier.

Still, the airline helpfully sent out a reminder the day before my flight with details including the exact location — the airline also warned that the flight would be slightly delayed due to inaugural activities.

Ultimately I found the Fan Pier — a spot on the harbor between the famed Institute of Contemporary Art and the federal courthouse — and spotted Tailwind’s lounge and check-in area.

The lounge itself is more like a little box, almost comically tiny. But the whole point of the seaplane concept is that you aren’t getting there too early and spending a lot of time hanging out at the airport (err, seaport). Instead, you can show up 10 minutes before departure and pretty much walk on board.

Still, for what it is, the lounge is perfectly comfortable. It has a well-stocked fridge, a coffee machine, and some snacks, along with some seats and — mercifully at this time of year — an air conditioner. There’s also a scale so that Tailwind can weigh your bag, crucial for proper weight and balance on such a small plane. The weight limit is 20 pounds, so be sure to pack light. My bag — filled with camera gear for the assignment — was two pounds over, but luckily the crew was able to accommodate it.

I showed up a few minutes earlier than necessary to get photos. I killed some time in the lounge and on the pier with a bottle of water, while a few other passengers walked up right at 10:30 for our 10:40 flight.Tailwind currently uses a floating pier in the middle of Boston Harbor for its seaplane service, which means there’s a water taxi from the actual pier to the floating one.

Since it leaves from a private facility, there’s no traditional security screening, although Tailwind says it checks passengers against a national security database in advance. It basically feels like flying private — you arrive and walk right onto the plane (after the ferry, on the Boston end).

Tailwind says the water taxi is about a seven-minute ride — we did it in six.

The water taxi was easy enough, and, given the partly cloudy skies with temperatures at around 80, was actually quite pleasant. There are plans for a removable cover to protect passengers during the rain and colder weather.

The Cessna 208 Caravans that Tailwind uses seat up to eight passengers, along with two pilots. There are four rows of seats in a 1-1 configuration, meaning everyone gets a window. On my flight, which had six passengers, the first two seats behind the pilot were blocked off to help balance the plane.

Like any small plane, they’re not the roomiest. But you’re not really paying for the hard product here — you’re paying for the speed and convenience. To fit down the aisle, I had to duck and carry my (admittedly large) backpack in front of me.

I sat in the first open row, so two rows behind the pilots. There was a bit less legroom than in the other rows, but Manice — who was on the flight — told me afterward that that is not normally the case, that it was likely a left over configuration from a charter flight, and that it would be fixed. Even with apparently less legroom, I was perfectly comfortable.

Each seat had a safety card and set of Sony noise-canceling headphones in the seatback pocket, which you could choose to plug into your own device — needless to say, there’s no in-flight entertainment.

We settled into our seats fairly quickly, and after a quick safety briefing, our pilots buckled in and taxied us away from the floating dock. They warned that the takeoff roll could be a bit bumpy, but it wasn’t that bad — it honestly just felt like riding a boat. A moment later, we were in the air.

The views of Boston were absolutely bonkers. We turned left over the Charles River before turning further to the south and climbing to a few thousand feet.

There were a few minor bumps as we left Boston, but nothing too extreme. Soon enough, we were cruising along.

Easily the best part of flying in small planes like this is being able to watch the action on the flight deck, and to follow along on the navigation screen.

It was a bit warm when we got on board, but my seat had an overhead vent — just like on a commercial plane — so I opened it and was comfortable for the rest of the flight.

I ended up not using my noise-canceling headphones, mostly because I didn’t have any devices with a headphone jack. When I looked back, two of my fellow passengers opted for them while another went with Airpod Pros. I didn’t find the engine too loud, though.

After takeoff, the flight was uneventful — which is the best you can hope for on a flight like this. I sat back and started processing photos, alternating with playing on my phone. Wi-Fi is not available, though the short flight time made that easier to manage. After just about an hour, we saw New York in the distance and began our approach.Our pilot gave us a five-minute warning for landing, and told us that we’d be approaching by flying south down the Hudson River, turning left around the lower tip of Manhattan, and landing north on the East River. The views were, again, stunning.

We flew over the Brooklyn Bridge, followed by the Manhattan and Williamsburg bridges. Once we were clear of the bridges, we began to descend.

Moments later, we touched down just off of the Stuyvesant Town neighborhood. It’s a lot of fun to touch down in a seaplane — it feels a lot smoother than a runway.

As we taxied a few blocks north, one of our pilots got out of the plane and stood on the left pontoon, ready to tie us to the dock.

A minute later, he grabbed the rope, jumped onto the pier, and then it was time for the rest of us to disembark.

Tailwind docks at the SkyPort Marina at the eastern end of 23rd Street. It was a simple matter of calling an Uber, and within about 10 minutes, I was at my office.

The entire trip, marina to marina (at least, counting from when I would have shown up if I didn’t want to be early to take photos) was about 85 minutes. A bit longer than the 75 minutes Tailwind cites as its optimal time, but jarringly efficient compared to the time it would take for the normal airline shuttles or Amtrak, even the Acela.

I would take this again in a heartbeat, as long as I didn’t have too much luggage, except for one thing: the price.

For those who are able and willing to spend that kind of money regularly, or whose employers will pay for the premium flights, Tailwind presents a stellar new option to travel between New York and Boston.