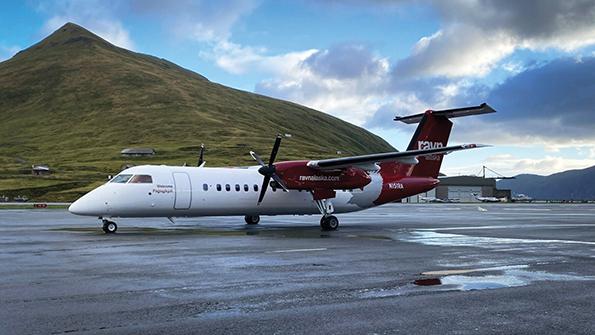 Northern Pacific Airways sees the convenience of its Anchorage, Alaska, hub and the links provided by sister airline Ravn Alaska as differentiators in its quest to find a niche in the transpacific market.

The startup is working on its plan to launch flights linking yet-to-be-identified large U.S. and East Asian markets. Among the wrinkles at the start: All flights will be via Anchorage on Boeing 757-200s.

“We strongly believe there’s enough traffic, and certainly by this time next year there’s going to be plenty of [origin-and-destination] traffic that we can offer a better price point and be competitive,” Northern Pacific CEO Rob McKinney tells Aviation Week.

The strategy is similar to the one used by Icelandic flag carrier Icelandair to compete for a slice of transatlantic traffic by routing travelers via Reykjavik, often with multi day visits in and around the city between connecting flights. Flying one stop through Anchorage puts key Asian gateways, such as Seoul and Tokyo, into play. The Alaskan hub offers a few additional advantages, such as hassle-free passage into the U.S. for eastbound travelers, McKinney says.

“We’re going to offer a better experience [at] customs and immigration in Anchorage,” he says. “It’s going to be a far superior experience than standing for some 3-hr. queue” at a larger U.S. gateway, he adds.

McKinney is part of a group that bought some assets of bankrupt regional operator Ravn Air Group, which paused operations in April 2020. The group restructured the airline and relaunched it as Ravn Alaska. After surveying the international airline landscape, it decided that flying narrowbodies between U.S. and Asian cities via Anchorage was worth a try as well.

Plans call for international operation to launch sometime in 2022, ideally with a dozen Boeing 757-200s. McKinney says the airline has one 757 in possession, letters of intent on six more and “soft commitments” on another eight.

“In a perfect world, we’re shooting for summer of 2022” to launch the service, he says. “Probably, in a realistic world, it’s going to be more like a year from now—fall of 2022.”

Northern Pacific’s operation will use the FAA certificate acquired as Ravn, making the path to approval easier than for a true startup. The 757s will be added to existing operations specifications.

Long term, the company acknowledges 757s would get the new airline only so far. “We realize that as we want to scale this up to 50 airplanes, you can’t scale with 20-year-old airplanes,” McKinney says. “We’re already in talks [about] what makes sense for the next generation, whether it’s going to be . . . a Boeing 737 MAX-series of some generation or the [Airbus] A321XLR. Who knows.”

In the meantime, Ravn will continue to rebuild traffic in its new, smaller network with its fleet of 10 De Havilland Canada Dash 8-100s and one Dash 8-300. The carrier serves 12 destinations in central and southern Alaska from its Anchorage base, down from more than 100 operated before the bankruptcy.

“There might be two or three more destinations left inside the state of Alaska” that Ravn will add, McKinney says. “We really kind of have hit what our sweet spot is, where we really make sense and can be most effective,” he adds, noting that Ravn does not want to battle Alaska Airlines.

“We really look to our [mileage agreement] partner at Alaska Airlines as just that—a partner and not so much a competitor,” he says. “We don’t really have any desire to go fly on top of them.”

Having Ravn in the family could help Northern Pacific emulate Icelandair’s strategy of drawing visitors through its hub with an extended stopover.

“We already serve [Alaska] with a fleet of Dash 8s, so we can take [visitors] out to go dogsledding on a glacier, we can take them to go fly fishing for salmon,” McKinney says. Northern Pacific’s business plan “doesn’t need [or] require it, but we really think that’s going to enhance the whole experience.”