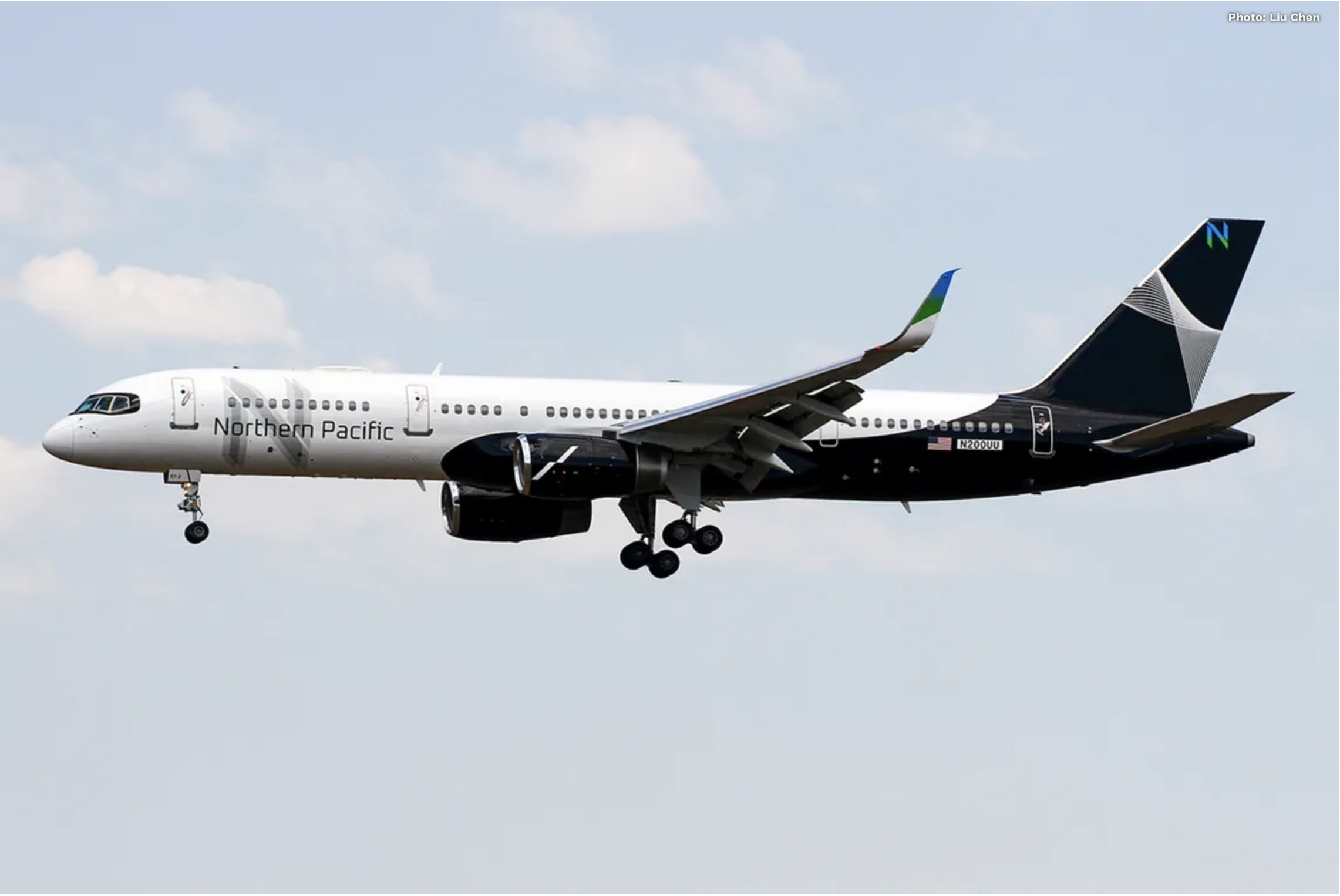 It's the airline's first flight with the 757 in full livery and with the cabin fitted out.

US startup airline Northern Pacific has commenced a demonstration tour to show off its refurbished airplane. The airline will take one of its Boeing 757s on a four-city, multi-state tour, to show off its onboard product to customers, partners and team members. The tour will take in California, Hawaii, and the Northern Marinas Islands before returning to the airline’s home base in Anchorage, Alaska.

It’s been nine months since Northern Pacific first unveiled its Boeing 757 to the world, at a glamorous event in Los Angeles, California. The airline has now taken ownership of four of the type, according to data from ch-aviation.com, and is ready to start generating some excitement for its long-haul narrowbody services.

The ultimate plan is to fly from major points in the USA to Asia via Alaska. This will allow passengers the opportunity to fly between the US and points including Japan and South Korea, with the unique offering of a stopover side trip to explore Alaska. Northern Pacific has been heavily investing in facilities at Anchorage to welcome its passengers, including a new bespoke lounge and a mini IMAX theatre.

But before it takes off on its mission, the airline is keen to generate enthusiasm for the service and has launched a multi-stop tour to introduce its aircraft to partners and customers. It’s a great opportunity for Northern Pacific to put its 757 through its paces, and for its crew to get some experience in long-haul operations ahead of full launch.

The first leg of the fight took off yesterday, and the entire tour will last for a week, with the airplane expected back in California on October 25th.

Northern Pacific has begun its ‘Show & Tell’ tour at its maintenance base in California, from where flew to Maui in Hawaii. The airplane took off from Ontario (ONT) at 16:23 yesterday afternoon, touching down in Kahului Airport at just after 18:30 local time. It’s the first flight for the airline under its new registration N628NP.

From there, it will head to Saipan, the largest island in the Northern Mariana Islands - a US commonwealth in the Western Pacific. It’s about a close to Asia as it can get whilst still being on US soil.

At Saipan, the airline is planning a special event, inviting guests from various partners in the States, Asia and in the Pan Pacific region. Northern Pacific says it will invite customers, airline partners, tourism authorities and members of the press to all the stops on its tour.

Once the festivities in Saipan are wrapped up, the Boeing 757 will head to Anchorage, Alaska. Landing at its new terminal at Ted Stevens International, Northern Pacific will host a welcome event for its guests to show off not only its airplane but also its new facilities at the airport itself.

The airplane undertaking the tour is N628NP, one of four 757s currently in NPA’s possession. It is a former American Airlines jet, with previous registration N200UU, which also flew for US Airways before the merger.

The tour will be the maiden flight for the airline, although without paying guests onboard. It’s a significant moment for the startup as it continues to press forward with its launch plans. As it moves closer to its official launch, it’s a great opportunity to see what it has to offer and how the passenger experience will be onboard.

The airline has picked the Boeing 757 for its launch aircraft for several reasons. Firstly, it’s the availability of aircraft – plenty of 757s have been retired from airline fleets in recent years, so there’s a solid pool of well-maintained, cheap planes to begin building the fleet.

The second reason is its huge range of around 3,900 NM, further than any other Boeing narrowbody, even the 737 MAX. It also has an impressive capacity of around 200 passengers, giving the airline maximum opportunity to sell more seats on its flights.

There’s a lot to love about the 757. It’s been a transatlantic workhorse for many years, but Northern Pacific will be the first to fly it between the US and Asia in this way. The airline notes that the type is well suited to long haul flying, and is cheaper to operate than widebody equivalents, enabling it to offer lower ticket prices to its guests.

While on tour, guests will have the opportunity to inspect Northern Pacific’s cabin for themselves. The airline revealed its installed seats just weeks ago, showcasing an elegant, carefully crafted aesthetic with interesting touches that reflect the unique livery on the outside. As well as comfortable-looking economy seats, Northern Pacific has also installed premium seats in the front of the cabin, laid out in a 2-2 arrangement with plenty of personal space.