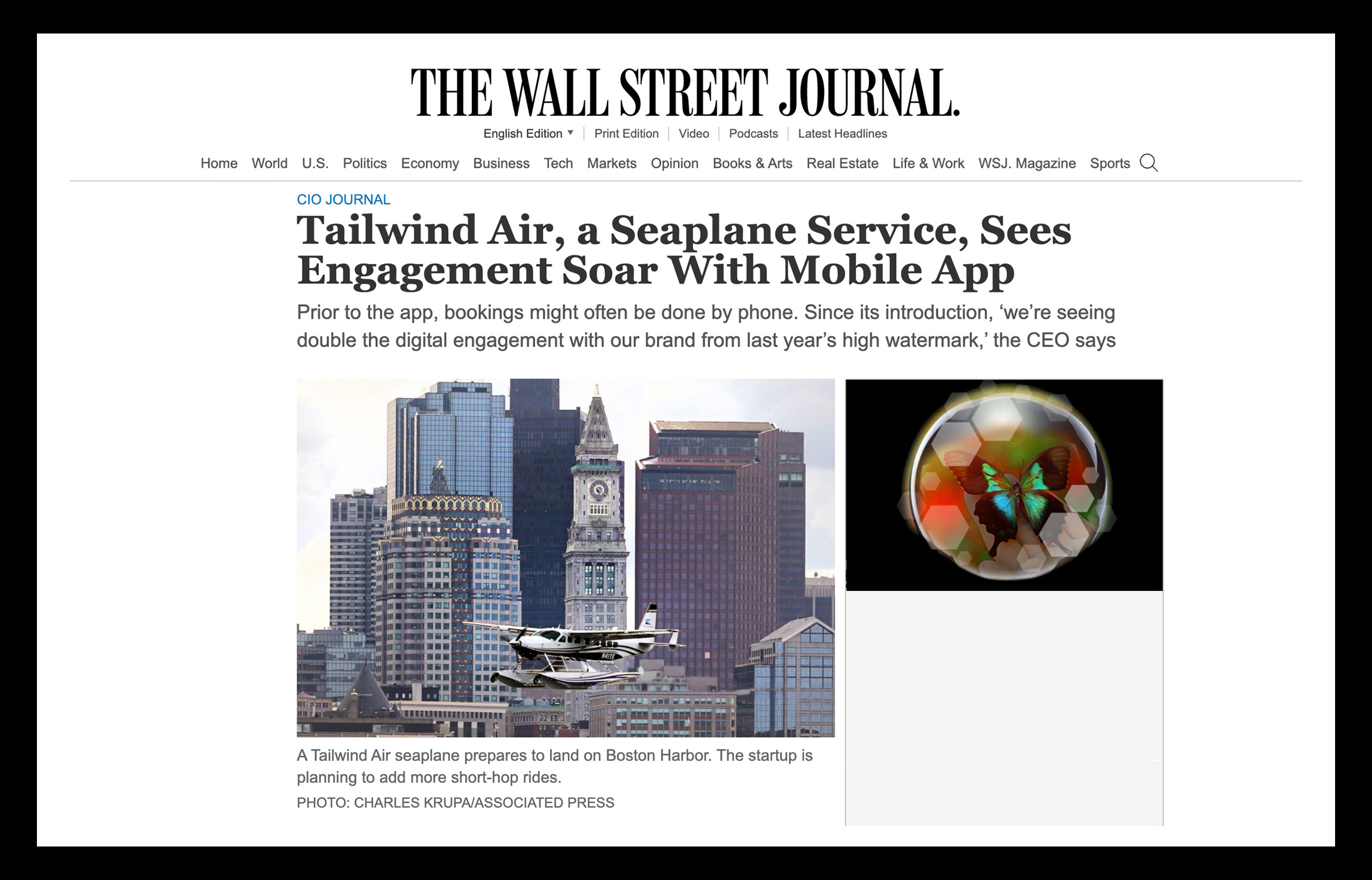 Each of the company’s three Cessna Caravan EX amphibian seaplanes has eight seats. Passengers are allowed one bag weighing less than 20 pounds, which is then stowed under a facing seat or in the rear baggage compartment.

In addition to seaplanes, the company also operates 17 land aircraft under management, ranging from Gulfstream and Falcon jets to King Air and Pilatus turboprops. Its crew of 40 pilots includes 10 seaplane captains and co-pilots.

Tailwind currently offers direct flights to seasonal havens like the Hamptons on New York’s Long Island, and Plymouth, Mass., among others. Last year, it began testing direct flights between New York City and Boston, and now offers commuter packages of 10 one-way tickets starting at $5,950, going up to $26,250 for a 50-ticket book.

Since March, the company offers three to four daily flights from New York and Boston to various destinations. Flights only run during the daytime from early spring to late fall, and are grounded in winter months.

“You could leave your office on Wall Street and be in downtown Boston in less than two hours,” Mr. Ram said. He refers to the service as an air taxi, in part because it bypasses the long lines, baggage-claim scrum and transit time to and from sprawling airports at the edge of town.

But software also plays a key role, Mr. Ram said. Late last year, he said, Tailwind launched a mobile app, developed in partnership with a third-party vendor, on which travelers can scan daily flight schedules and reserve one of eight seats onboard.

”We generally close flights 90 minutes or less before takeoff, and if there’s an available seat you can hop on,” Mr. Ram said. With no Transportation Security Administration or baggage checks, passengers need only arrive at the pier around 10 minutes before their flight, he added.

Before the app, bookings tended to be done manually, with many regular passengers calling in reservations instead of going through the company’s website, Mr. Ram said.

Tailwind’s mobile app allows passengers to scan daily flight schedules and reserve one of eight seats onboard its amphibious planes.

“Right now, we’re seeing double the digital engagement with our brand from last year’s high watermark,” he said. He expects to add a fourth seaplane by the end of the year, and three more by the end of 2023, he said.

The company, which operates on a 50-50 mix of angel-investor funding and earnings, saw its revenue double last year, Mr. Ram said, declining to give specifics.

Like Tailwind itself, the air-taxi industry is in its infancy—along with the fledgling efforts of the biggest players in aviation, which are adding electric and autonomous elements to it.

On Wednesday, Mr. Hoffman said the company is on track to launch operations within the next two years. “We’re on plan,” he said, adding that air taxis—especially in the form of electric helicopters—represent a chance to rethink the urban transportation space in a way that is cleaner and more efficient.

Smaller-scale firms operate on models similar to that of Tailwind. On Blade Urban Air Mobility Inc., headquartered in New York, customers can also book trips on helicopters and jets through a smartphone app, taking passengers to destinations roughly 100 miles away or more. (For comparison, Boston to New York is around 190 miles.)

Unlike eVTOLs, Mr. Ram said, Tailwind’s advantage is that its underlying infrastructure and technology are already in place—and have been for more than a century.

“The idea of an air taxi being able to land on every building or on the corner creates challenges of airspace integration and customer acceptance,” he said. “We’re concentrating it around existing infrastructure.”